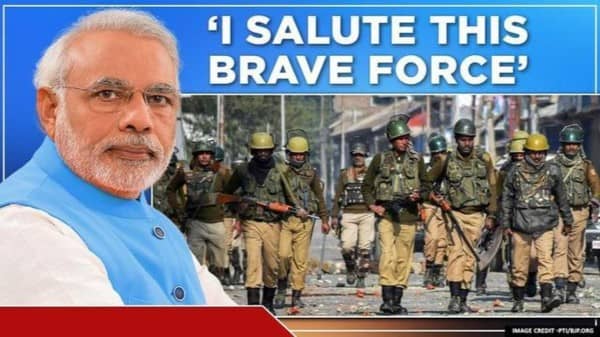 Every year on April 9, people in India observe Central Reserve Police Force (CRPF) Shaurya Diwas (Valour Day) in order to pay respect and tribute to the brave men of the Reserve Force. This year will mark the 57th celebration of CRPF Valour Day. It was on this day in 1965, a small contingent of CRPF created history by defeating an invading Pakistani army, several times larger, at the Sardar Post located in the Rann of Kutch, Gujarat. The CRPF men eliminated 34 Pakistani soldiers and captured four alive. In the conflict, CRPF lost six personnel who had attained martyrdom

On the intervening night of 8 and 9 April 1965, 3500 men of the 51st Infantry Brigade of Pakistan, comprising 18 Punjab Bn, 8 Frontier Rifles, and 6 Baluch Bn, stealthily launched operation "Desert Hawk" against border posts in Rann of Kutch. It was to the valour of Head Constable Bhawana Ram deployed on the eastern parameter of Sardar Post whose gallant act was to a great extent instrumental in demoralizing the intruders and forcing them to retreat from the post.

The assault, most of which took place on a tactically disadvantageous flat area, began at 3.30 pm and went on for a grueling 12 hours, during which the enemy made three attempts to overrun the CRPF post. Six CRPF soldiers died in the attack. As a tribute to the saga of the brave men of the Force, 9th April is befittingly celebrated as Shaurya Diwas in the Force.

Meanwhile, for the unacquainted, the CRPF is India's largest Central Armed Police Force. It functions under the authority of the Ministry of Home Affairs. The CRPF's primary role lies in assisting the State/Union Territories in police operations to maintain law and order and counter-insurgency. It came into existence as the Crown Representative's Police on 27 July 1939. After Indian Independence, it became the Central Reserve Police Force on the enactment of the CRPF Act on 28 December 1949.