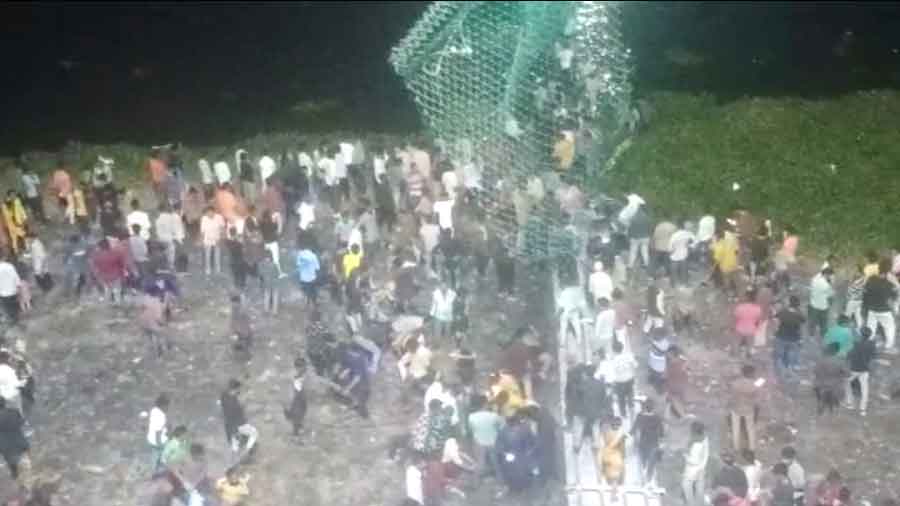 Gujarat : Morbi bridge collapse toll rises to 77 No break-up of the deceased available yet.

At least 77 people, including women and children, were killed and scores were missing as the hanging bridge over the Machhu dam in Gujarat's Morbi district collapsed on Sunday evening, officials said.

Many bodies had been fished out from the Machhu river and sent for for post-mortem examinations at the Morbi government hospital while Morbi MLA and Minister of State for Panchayat Brajesh Merja confirmed the number of deaths. No break-up of the deceased was available yet.

Chief Minister Bhupendra Patel, who has cancelled all his programmes and rushed to Morbi to personally monitor rescue and medical services, announced Rs 4 lakh compensation to the kin of the deceased and Rs 50,000 financial help to those injured in the accident.

Patel is likely to camp in Morbi till the rescue operations continue.

Prime Minister Narendra Modi, who took cognisance of the accident, announced a compensation of Rs 2 lakh to the next of the kin of the dead from the PM's Relief Fund, and Rs 50,000 for the injured.

According to a tweet by the Prime Minister's office, "PM @narendramodi spoke to Gujarat CM @Bhupendrapbjp and other officials regarding the mishap in Morbi. He has sought urgent mobilisation of teams for rescue ops. He has asked that the situation be closely and continuously monitored, and extend all possible help to those affected"

Meanwhile, the Morbi Municipal Committee's Chief Executive Officer S.V. Zala, in a shocking revelation, said that the bridge was opened for the public after renovation without a fitness certificate from the civic body.

On the state government's request, Union Home Minister Amit Shah has deployed one NDRF team from Rajkot, while Defence Minister Rajnath Singh has instructed the Army rescue teams to rush to Morbi.

The rescue operation is likely to be carried out the entire night, as locals fears that children's bodies have be swept away due to the water flow in the Machhu river.

Local authorities' apprehension is that the bridge has collapsed right in the middle of the river, where the water level is 15 to 20 feet deep, and due to this the death toll is likely to rise.

A total of seven fire brigade teams were pressed into rescue services, and one State Disaster Response Force team, and two NDRF teams from Gandhinagar rushed to the spot. Local authorities have started a helpline number - 02822-243300 - on which people can seek help to know about their missing relatives.