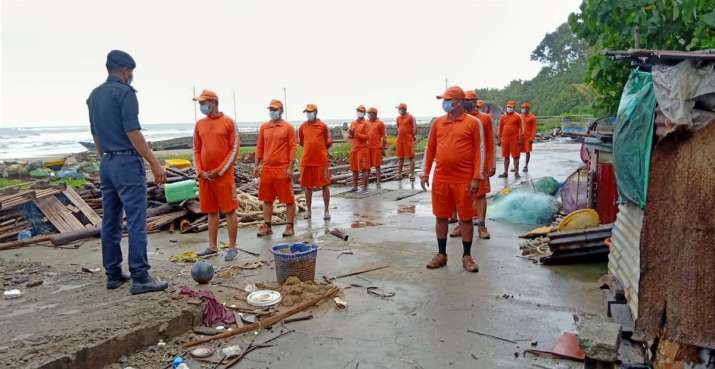 Earlier on Monday, India Meteorological Department (IMD) Senior Scientist RK Jenamani informed that the severe cyclonic storm 'Asani' is likely to recurve over the sea away from the coast, and would not cross Andhra Pradesh, Odisha, or West Bengal.

The weather department had said under the influence of Asani, some coastal districts of Odisha are expected to receive heavy rainfall from May 10 onwards.

Meanwhile, at least 11 fishermen from Odisha, who were stranded for around eight hours in the rough sea due to the raging severe cyclone 'Asani', were rescued on Monday with help of the Indian Coast Guard, an official said.

The fishermen had on May 7 gone to Andhra Pradesh's Visakhapatnam to buy a fishing boat, and while returning from there, they were stuck in the sea around 4-5 km off the coast near Sonaput in Ganjam district after their newly-bought vessel developed some technical glitches, he said.

The cyclonic storm system, which lay about 410 km southeast of Visakhapatnam and 590 km south of Puri at 2.30 pm on Monday, is moving in a north-westward direction with a sustained surface wind speed of 100-110 kmph gusting to 120 kmph.

It caused heavy to moderate rainfall in Odisha and West Bengal during the day.

The weather office said that very high sea conditions were likely to prevail over west-central and adjoining south Bay of Bengal and asked fishermen not to venture out in the region from Tuesday for at least two days.

It also advised that tourism activities in coastal areas and sea beaches be suspended till May 13.

The cyclone is likely to cause heavy rain in the southern part of West Bengal including Kolkata, Howrah, Purba Medinipur, North and South 24 Parganas and Nadia districts between Monday and Thursday, the weatherman said.

Kolkata and its adjoining areas received a spell of downpour on Monday morning, leading to waterlogging of thoroughfares and causing traffic snarls in various parts of the city.