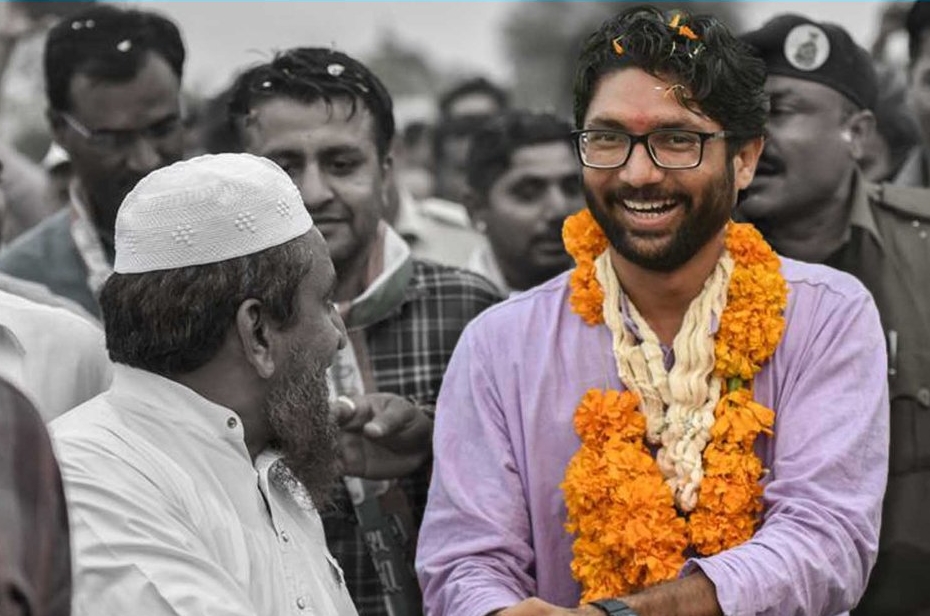 An Assam court on Friday granted bail to Gujarat MLA Jignesh Mevani, accused of assaulting and outraging the modesty of a policewoman, saying the case was “manufactured” to keep him “in detention for a longer period, abusing the process of the court and the law”.

Barpeta sessions judge A. Chakravarty observed that the policewoman’s deposition before a magistrate clashed with the contents of the FIR, which he said was anyway the “second FIR” and therefore “not maintainable”.

The court said Mevani should be released “forthwith” against a personal bond of Rs 1,000. A member of the state Congress legal team said efforts were on to complete the formalities for the release of the party-backed Independent MLA.

The court made scathing remarks against Assam police. It said that to avert the registration of “false FIR like the present one” and curb the police’s killing or framing of accused, cops should be made to wear body cameras and CCTVs should be installed in police stations and vehicles.

The court expressed fear that without police reforms, Assam might become a “police state”. Forty-six people have been killed and over 110 injured in police action in the state since the current BJP-led government came to power last May.

The alleged assault on the woman sub-inspector took place at Simaluguri in Barpeta district while she was escorting Mevani to Kokrajhar from Guwahati airport in an official vehicle with two other officers on April 21. She lodged the FIR at Barpeta Road police station, about 90km from Kokrajhar.

The previous day, Mevani was arrested from Gujarat by a Kokrajhar police team over a tweet on Prime Minister Narendra Modi that referred to Nathuram Godse .

He received bail from a Kokrajhar court on Monday in the tweet case, where he is accused of promoting enmity between different groups and other offences. Moments later, he was arrested in the assault case.

“In view of the above testimony of the victim woman, the instant case is manufactured for the purpose of keeping the accused Jignesh Mevani in detention for a longer period, abusing the process of the court and the law.”

In the FIR, the woman officer had alleged that Mevani had used abusive words inside the vehicle. When she asked Mevani to behave, she says, he became very “agitated and used more slang words, tried to frighten me and pushed me on my seat with force”, PTI had reported.

The FIR said, according to the PTI report: “He thus assaulted me during the execution of my duty as a public servant and outraged my modesty by touching me inappropriately while pushing.”

The sessions judge said the policewoman had in her deposition to the magistrate said she had told everything to the Kokrajhar superintendent of police and thereafter lodged the FIR. So, “the instant FIR is the second FIR”.

“In fact, the superintendent of police, Kokrajhar, should have and ought to have directed the victim woman to lodge the FIR with the Kokrajhar police station. But for reasons best known to him he did not do so. Therefore the case registered based on the instant FIR is not maintainable as the FIR is the second FIR. In view of the above, the bail petition is allowed,” the sessions court said.

It also questioned the police’s failure to inform the Kokrajhar court or Mevani about the Barpeta Road FIR before Monday’s bail order.

“Further, if the instant case is accepted to be true and in view of the statement of the victim woman recorded by the magistrate under Section 164 CrPC, which is not, then we will have to rewrite the criminal jurisprudence of the country,” the court said.

“Because, according to Section 26 of the Evidence Act, even confession made by an accused while in custody of police cannot be proved against him…. But the legislature never imagined that the court would have to deal with a case… where the accused will be tried allegedly for committing some offences while he was in the custody of police, which no one else has seen.”

The court said that to prevent the registration of “false FIR like the present one” and to give credibility to police claims of accused trying to escape while leading cops to discover something, and the “police personnel firing and killing or injuring such accused, which has become routine phenomenon in the state, the honourable Gauhati High Court may perhaps consider directing the Assam police to reform itself by taking some measures....”

The measures the sessions court suggested included directing every police personnel engaged in law-and-order duty to wear a body camera, and installing CCTV cameras at every police station and in vehicles while ferrying accused.

“Otherwise our state will become a police state which the society can ill afford.... Converting our hard-earned democracy into a police state is simply unthinkable and if the Assam police is thinking about the same, the same is perverse thinking,” the sessions court said.

It directed that a copy of the order be sent to the registrar-general of the high court so it can be placed before the chief justice “to consider whether the matter may be taken up as a public interest litigation to curb the ongoing police excesses in the state”.

In the Barpeta case (81/2022), Mevani has been booked under penal sections 294 (using obscene words), 323 (causing hurt), 353 (assault or using criminal force to deter a government official from discharging duty) and 354 (assault on a woman with intent to outraging her modesty). Sections 353 and 354 are non-bailable.