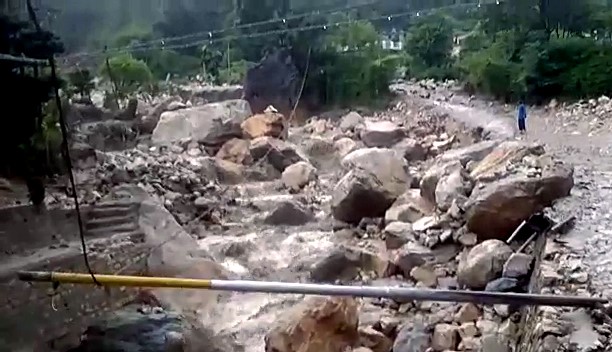 At least 15 persons have so far reportedly been killed and 40 are feared missing in a cloudburst near the cave shrine of Amarnath in south Kashmir Himalayas Friday evening, damaging 25 tents and three community kitchens, officials said

"One NDRF team is always deployed near the holy cave, it immediately engaged in the rescue work. One more team has been deployed & another is on its way," NDRF DG Atul Karwal said adding that the rescue operation is still ongoing.

"Situation is under control, rains are still going on. Looking at the hazard level, the Amarnath Yatra has been halted temporarily due to the area being inundated. If the weather remains normal and makeshift arrangements are made, then the yatra can be resumed tomorrow," said ITBP spokesperson PRO Vivek Kumar Pandey.

A video of the cloudburst has surfaced, in which the flood of Pali is seen flowing rapidly

NDRF, SDRF and other associated agencies along with ITBP are stationed at the site to carry out rescue operations. Helicopters are also being used to rescue people.

"This is an unfortunate incident. Our focus is to rescue the pilgrims and take them to safe places. NDRF helpline numbers are active. Rescue work is underway. Army helicopters are also in action. Search operation is on," Nitishwar Kumar, CEO Amarnath Shrine Board said.

According to ITBP, water came from above the cave after heavy rains in the upper reaches.

"At around 5.30 pm heavy rainfall was happening, suddenly huge flow of water came. Cloudburst happened in the upper reaches of Amarnath cave. Agencies were alerted. There were tents at the site, people were taken out within 10-15 mins," ANI quoted Vivek Kumar Pandey, PRO, ITBP as saying

Expressing grief over the incident, former Jammu and Kashmir chief minister Omar Abdullah tweeted, "Sorry to hear about the cloudburst near the Amarnath Cave. Prayers for everyone caught up in it with the hope that they are all able to escape unscathed."

"Saddened & shocked to know about the tragic cloudburst accident near the Amarnath cave. Deepest condolences to the families of those who lost their lives," JKPDP President Mehbooba Mufti tweeted.

Prime Minister Narendra Modi also expressed condolences to the families of the victims and said that he is taking stock of the situtaion.

"Anguished by the cloud burst near Shree Amarnath cave. Condolences to the bereaved families. Spoke to@manojsinha_Ji and took stock of the situation. Rescue and relief operations are underway. All possible assistance is being provided to the affected," the PM tweeted.