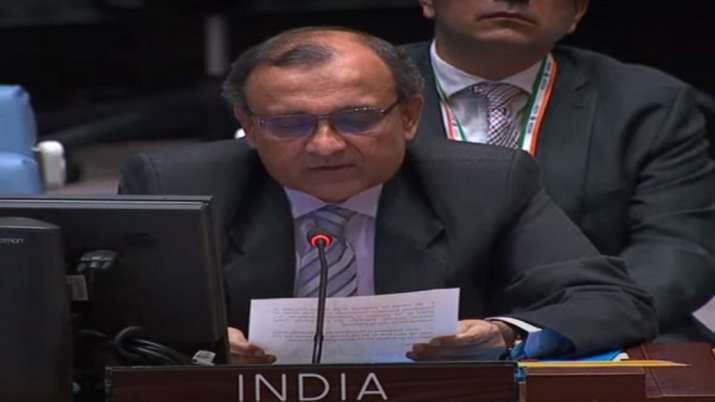 "The food security challenges emanating from the conflict require us to respond by going beyond constraints that bind us presently. Energy security is equally a serious concern and needs to be addressed through cooperative efforts," Tirumurti further said. Tirumurti reiterated India's consistent calls for "complete cessation of hostilities (in Ukraine) and for pursuing the path of dialogue and diplomacy as the only way out." "However, the conflict has resulted in loss of lives and countless miseries for its peoples, particularly for women, children and elderly, with millions becoming homeless and forced to take shelter in neighbouring countries," he said.

"India has strongly condemned killing of civilians in Bucha and supported the call for an independent investigation," Tirumurti further said. The Indian envoy also welcomed the presence and remarks of the UN Secretary-General Antonio Guterres during the briefing. "We acknowledge the efforts made by the Secretary-General, particularly the findings of the Global Crisis Response Group Task Team. We welcome their recommendation for exempting purchases of food by WFP (World Food Programme) for humanitarian assistance from food export restrictions with immediate effect," Tirumurti said. "It is important that similar exemptions are provided to all member states and relevant stakeholders, who are contributing to this global humanitarian effort," he added.

India also welcomed the recent visit of Guterres to Moscow and Kyiv and his engagement with the leadership of the Russian Federation and Ukraine. "We agree that the immediate priority is of evacuation of innocent civilians from areas witnessing intense fighting. We appreciate the efforts of the United Nations in evacuating civilian population from Mariupol. We hope these efforts will extend to other areas as well," Tirumurti said. Speaking earlier, Guterres had expressed hope that the UN's continued coordination with the governments of Russia and Ukraine will help facilitate humanitarian aid efforts.

"I hope that the continued coordination with Moscow and Kyiv will lead to more humanitarian pauses to allow civilians safe passage from the fighting and aid to reach those in critical need," Guterres said. Talking about India's humanitarian assistance to Ukraine, Tirumurti said, "India has been sending humanitarian supplies to Ukraine and its neighbours, which include medicines and other essential relief material. We are also providing more medical supplies to Ukraine." He added that India supports calls for guarantees of safe passage to deliver essential humanitarian and medical supplies through humanitarian corridors. "Humanitarian action must always be guided by the principles of humanitarian assistance, i.e., humanity, neutrality, impartiality, and independence. These measures should never be politicized," Tirumurti emphasized. "Let me conclude by reaffirming that the contemporary global order has been built on the UN Charter, international law and respect for sovereignty and the territorial integrity of states," Tirumurti said.