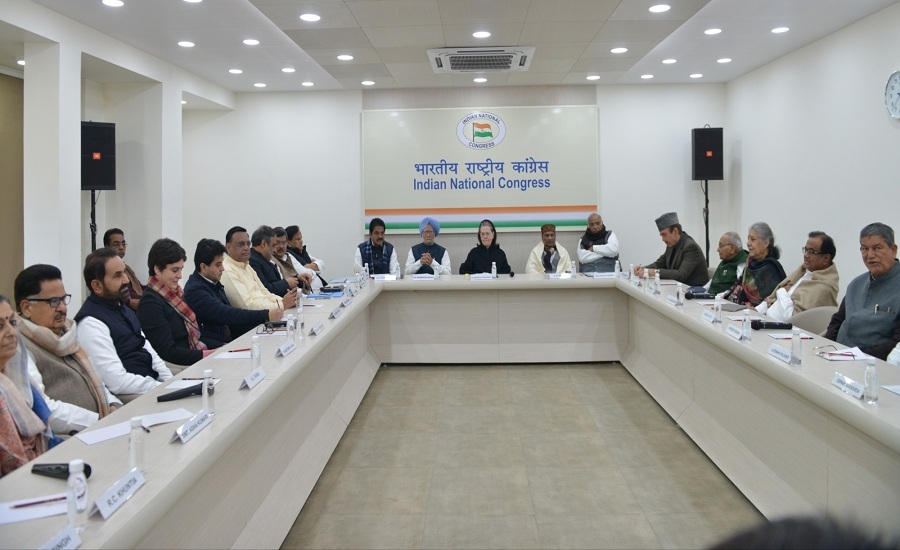 Our revival is not just a matter of importance essential for our democracy itself : Sonia Gandhi

Congress President Sonia Gandhi on Tuesday chaired a meeting of the parliamentary party and discussed the current political situation and the party's strategy in both houses of Parliament.

Congress Parliamentarians in both the Lok Sabha and Rajya Sabha including former Prime Minister Manmohan Singh and Rahul Gandhi attended the meeting in the central hall of Parliament.Leader of Opposition in the Rajya Sabha Mallikarjun Kharge and Congress leader in the Lok Sabha Adhir Ranjan Chowdhury were also present.

Congress interim President Sonia Gandhi while addressing the parliamentary party on Tuesday said that the revival of the party is essential for democracy and the results of elections were "shocking" and "painful".

In her address she said, "Our dedication and determination, our spirit of resilience is under severe test. Unity at all levels of our vast organisation is of paramount importance and speaking for myself, I am determined to do whatever is needed to ensure it. Our revival is not just a matter of importance to us alone...it is, in fact, essential for our democracy itself and indeed for our society as well."

"I am very well aware how disappointed you are at the recent election results. They have been both shocking and painful. The Congress working committee (CWC) has met once to review our performance. I have met with other colleagues too. I have received many suggestions on how to strengthen our organisation. Many are pertinent and I am working on them," she said.

She said that it was important to put forth a roadmap and for that a 'Shivir (meeting)' should be held.

"That is where the views of a larger number of colleagues and party representatives will be heard. They will contribute to put forward a clear roadmap on the urgent steps to be taken by our party on how best to meet the challenges we are confronted with," she said.

Congress President Sonia Gandhi on Tuesday called for unity at all levels of the organisation while noting that the road ahead for the party is more challenging than ever before and the spirit of resilience of party workers is under severe test.

Addressing a meeting of the Congress Parliamentary Party, she also hit out at the BJP, saying the ruling party's "divisive agenda" has become a regular feature of political discourse in all states and that history is being "mischievously distorted" to add fuel to its agenda.

"The divisive and polarising agenda of the ruling party and its leaders has now become a regular feature of the political discourse in state after state. History, not just ancient but also contemporary, is mischievously distorted and facts are maliciously invented to add fuel to this agenda.It is for us all to stand up and confront these forces of hate and prejudice," she charged.

"We will not allow them to damage the bonds of amity and harmony that have sustained and enriched our diverse society for centuries," she told party MPs of both Lok Sabha and Rajya Sabha.

This is the first meeting of the Congress Parliamentary Party (CPP) after the party's poll debacle in the recent assembly elections in five states.

The Congress has been seeking to corner the government on the issue of inflation and rise in prices of petrol, diesel and LPG gas.