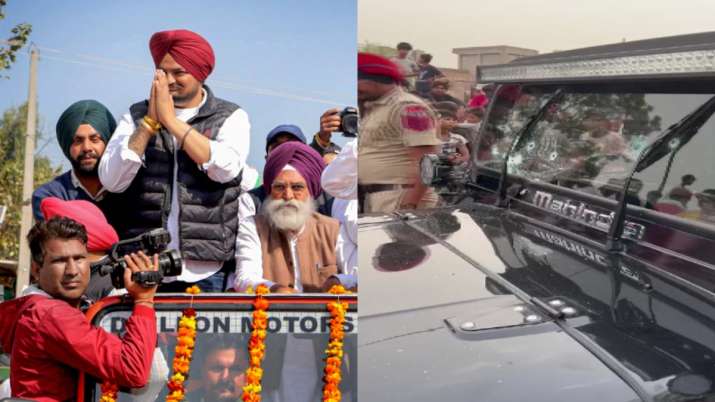 According to reports, the attack on Moose Wala (also known as Shubhdeep Singh Sidhu) took place just a day after the Punjab government had withdrawn his security.

Speaking on the incident, Mansa SSP Gaurav Toora said, "preliminary investigation shows it to be an inter-gang rivalry. Sidhu Moose Wala didn't take his bulletproof car and gunman today. FIR is being registered. We will take immediate action against the gangster and persons involved."

Moose Wala was shot at by unknown people in Mansa district. Three people including Sidhu were injured in the firing incident, however, Moose Wala succumbed to injuries.

"Three people were brought to the hospital, out of which Sidhu Moose Wala was dead. After giving primary treatment, the two injured have been referred to a higher institute for further treatment," said Dr Ranjeet Rai, Civil Surgeon, Mansa Hospital.

Punjab DGP VK Bhawra said, "After leaving his home when Sidhu Moose Wala was driving his car along with two others in Mansa district, 2 cars came from front & firing took place. He was injured & was taken to hospital where he was brought dead. It seems like an inter-gang rivalry."

"Lawrence Bishnoi gang is involved in this murder. Lucky, member of the gang has taken responsibility from Canada. He had 4 commandos from Punjab Police out of which 2 was taken back but he was having two commandos which Moose Wala didn't take along with him today," Punjab DGP said.

Condemning the brutal killing of the Congress leader, Punjab CM Bhagwant Mann wrote, "I am shocked and deeply saddened by the gruesome murder of Siddhu Moose Wala. Nobody involved will be spared. My thoughts and prayers are with his family and his fans across the world. I appeal to everyone to stay calm."

The murder of Sidhu Moose Wala, Congress candidate from Punjab & a talented musician, has come as a terrible shock to Congress party & the entire nation. Our deepest condolences to his family, fans & friends," the Congress party tweeted.

In the 2022 Punjab assembly election, Moose Wala had contested from Mansa on a Congress ticket. He was, however, defeated by Aam Aadmi Party's Dr Vijay Singla. The singer had joined the Congress in December last year.

Lashing out at the AAP-led government in Punjab, BJP leader Manjinder Singh Sirsa said that earlier around 8-10 armed security guards used to provide protection to Moose Wala, however, after his security was withdrawn, only 2 gunmen were put to his service."

"We have been warning Punjab Govt to pay attention to Punjab’s situation. I demand an FIR against Bhagwant Mann for negligence of his Chief Ministerial duties which has cost the life of #sidhumoosewala. Bhagwant Mann along with @ArvindKejriwal should be booked u/s 302," Sirsa tweeted.

Former Punjab chief minister Captain Amarinder Singh said, "Brutal murder of Sidhu Moose Wala is shocking. My profound condolences to the bereaved family. Law and order has completely collapsed in Punjab. Criminals have no fear of law. @AAPPunjab government has miserably failed. Nobody is safe in Punjab!"

Hitting out at the AAP-led Punjab government on the brutal killing of a politician and Punjabi singer, BJP IT cell head Amit Malviya said, "Punjab is up in flames! Is popular singer Sidhu Moose Wala’s cold-blooded murder the change AAP promised? Arvind Kejriwal and Raghav Chaddha, who run Punjab by proxy, must be held accountable for this murder. Did they not know of the threat before withdrawing his security?"

"The murder of Sidhu Moose Wala is very sad and shocking. I just spoke to Punjab CM Mann Sahib. The culprits will be given the harshest punishment. I request everyone to keep calm and maintain peace. May God rest his soul," said Delhi CM and AAP convener Arvind Kejriwal.

"Deeply shocked and saddened by the murder of promising Congress leader and talented artist, Sidhu Moose Wala. My heartfelt condolences to his loved ones and fans from across the world," tweeted Congress leader Rahul Gandhi.

"Shocked to learn about the killing of young Punjabi singer Sidhu Moose Wala. My sympathies with his family & friends. Those responsible must be arrested without delay. This exhibits an abject breakdown of law & order in Punjab," SAD president Sukhbir Singh Badal said.

"Murder of Sidhu Moose Wala has shocked the country. This should be considered a state-sponsored murder. Firstly, the security of 400 people was withdrawn & then their names were published on social media. It's criminal negligence. CM must resign," demanded SAD leader Daljit Singh Cheema