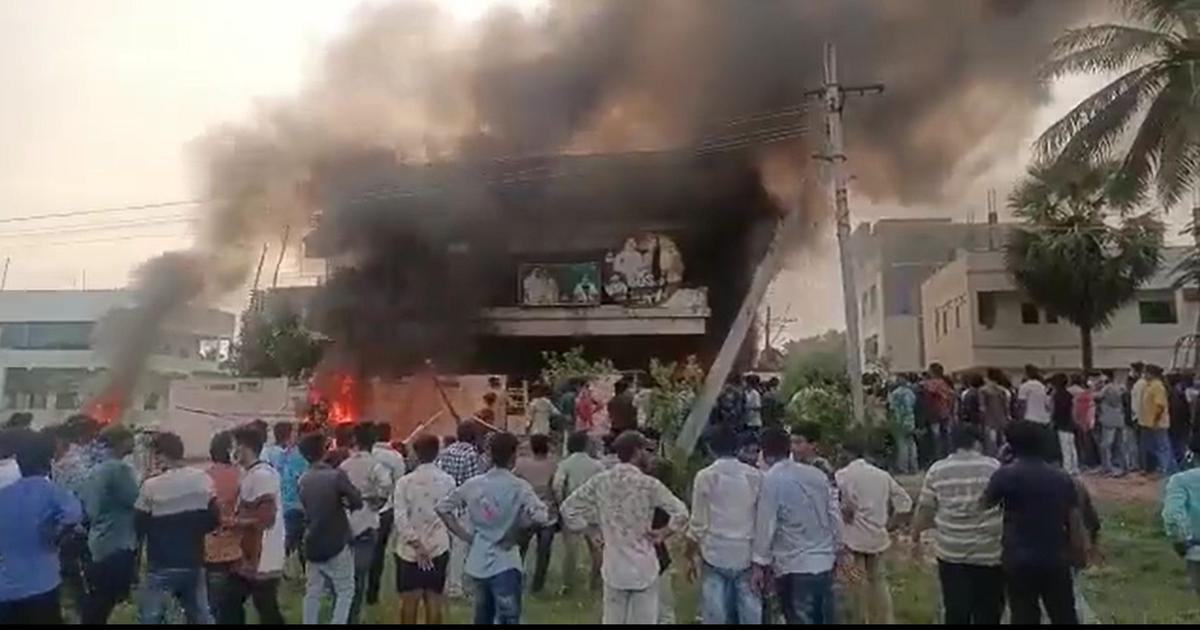 Dozens of people including police personnel were injured as violence broke out in Andhra Pradesh's Amalapuram town on Tuesday during the protest by a group against the government's move to rename Konaseema district as Dr B.R. Ambedkar Konaseema district.

Protesters opposing the proposal to rename the district also attacked the residence of state minister P. Viswaroop, torched few vehicles and resorted to stone-pelting, triggering tension in the town.

A mob set a couple of vehicles afire at the minister's house and also ransacked the office. The minister's family members escaped unhurt as the police had shifted them to a safe place.

Hundreds of youth participated in the protest called by Konaseema Sadhana Samithi (KSS). Raising slogans against the government's decision, they gathered at the Clock Tower.

As police moved to detain the protesters, some of them ran towards the collector's office. Police chased and arrested some of them. As they were being taken in police vehicles, others pelted stones damaging window panes. The mob set afire a police vehicle and a private bus. However, there was no one in the vehicles.

The youth also pelted stones on police near Amalapuram Area Hospital. Superintendent of Police K.S.S.V Subba Reddy escaped in the stone-pelting but some police personnel were injured. Police resorted to baton charge to control the situation.

Home Minister T. Anita condemned the violence. She said anti-social elements were leading the protesters. She said it was unfortunate that the decision to name the district after the father of the Indian Constitution Dr Ambedkar was opposed.

The home minister claimed that the decision was taken at the request of the people. The Konaseema district was carved out from East Godavari with Amalapuram as its headquarters.

It was one of the 13 districts created on April 4, taking the total number of districts in the state to 26.

The YSR Congress Party (YSRCP) government headed by Y.S. Jagan Mohan Reddy had come under criticism from Dalit groups and others for not naming a district after Ambedkar.

The state government on May 18 issued a notification inviting objections and suggestions on the proposal to rename the Konaseema district after Dr Ambedkar. It sought suggestions and objections from the people residing within Konaseema.

People have been urged to send objections and suggestions, if any, to Konaseema district collector within 30 days.

However, opposing the proposal, KSS had called for protests. The police had imposed prohibitory orders in the town in view of the protest call.