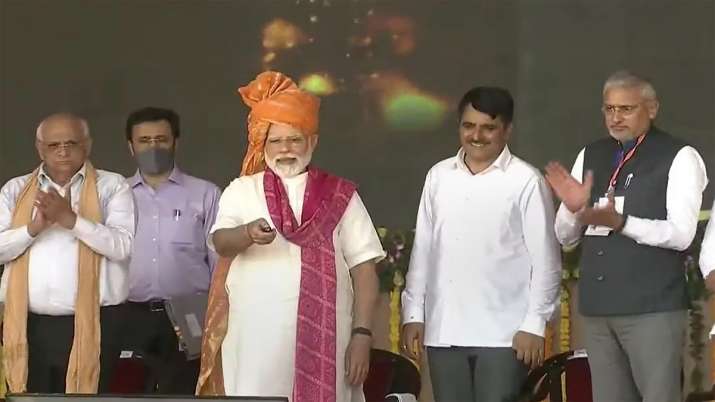 Prime Minister Narendra Modi on Tuesday said India produces milk worth Rs 8.5 lakh crore annually, more than the turnover of wheat and rice, with small farmers being the biggest beneficiaries of the dairy sector. "Today, India is the world's largest producer of milk. When the livelihood of crores of farmers depend on milk, India produces milk worth Rs 8.5 lakh crore annually, something that many people, including big economists, do not pay attention to," the prime minister said while addressing a gathering at Diyodar in the Banaskantha district after inaugurating a new dairy complex and a potato processing plant of the Banas Dairy.

"Decentralised economy system of villages is an example of this. As against this, even the turnover of wheat and rice is not equal to Rs 8.5 lakh crore. And small farmers are the biggest beneficiaries of the dairy sector," he said. The new dairy complex and the potato processing plant of Banas Dairy are aimed at empowering local farmers and giving a boost to the rural economy in the region. The Prime Minister also dedicated to the nation the Banas Community Radio Station and the expanded facilities for the production of cheese products and whey powder at Palanpur, and organic manure and biogas plant established at Dama.

He further said Vidya Samiksha Kendra in Gandhinagar can bring substantive changes in the field of education across the country while calling upon other states to study the initiative. After laying the foundation stone for multiple projects at Banas Dairy Sankul in Diyodar in Gujarat's Banaskantha district, the Prime Minister said the children in the country by getting benefit from a modern system like Vidya Samiksha Kendra will ensure a bright future for India. "It gives great pride to see the success and development of Gujarat in all walks of life. I experienced this yesterday at Vidya Samiksha Kendra in Gandhinagar. The use of such a huge technology for our government primary school is a wonder for the world. I have been associated with this sector before, but yesterday I specially went to Gandhinagar to see it," he said. The Prime Minister stressed that Vidya Samiksha Kendra can bring big changes in the field of education across the country. "I would also ask the concerned ministries and officials of the Government of India to study Vidya Samiksha Kendra. The concerned departments of different states should also come to Gandhi Nagar and study the initiative," PM Modi said.

PM Modi said that Gobar Gas plants by Banas Dairy will help the government's campaign of 'Kachre Se Kanchan (waste to wealth)'. "Today a Bio-CNG plant has been dedicated here and the foundation stone for four Gobar Gas plants has been laid. Banas Dairy is going to set up many such plants across the country. This is going to help the government's campaign of 'Kachre Se Kanchan'," added PM Modi. "Many goals are being achieved simultaneously through Gobardhan. One, it is giving strength to cleanliness in the villages and second, cattle farmers are also getting money for cow dung," he said .