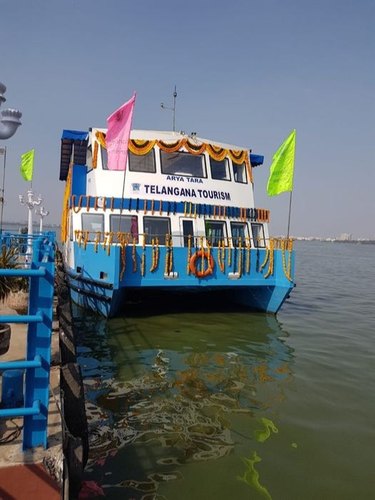 Double-decker boat, at a cost of Rs 1.13 crore introduced in Lower Manair Dam .

Karimnagar’s push for recognition as a major tourist destination in the State gets a shot in the arm with a double-decker boat set to be introduced in Lower Manair Dam soon.

The double-decker boat, being acquired at a cost of Rs 1.13 crore would not only facilitate the local population to celebrate parties or organise other small events in the dam, but would also be a major attraction for tourists

Hyderabad Boat Builders is building the boat in the LMD waters and 80 per cent of the works have been completed, tourism officials told Telangana Today. The 120-seater boat can be used for various purposes including parties and water tours. It will have a 40-seat capacity dining hall on the lower deck and 80 seating capacity on the upper deck.

Footfall of tourists in the district has been on the rise with the project always brimming with water following the completion of Kaleshwaram project. According to officials, two jet-skis, a 20-seater deluxe boat and four seater speed boats are available at present.

Though the jet-skis are not operating due to various reasons, the deluxe and speed boats are being hired by tourists who visit the dam site. Speaking to Telangana Today, an official K Rakesh said residents of Karimnagar town do not have big parks and other recreation centres like in Hyderabad and Warangal.

“It will be a different experience for people to celebrate joyous occasions in the water availing the double-decker boat facility,” he said. Officials said the demand for boat would be high in cities like Karimnagar. Double-decker boats are being operated in Hussain Sagar, Nagarjunasagar and Somasila. “However, there is little scope for holding parties in double- decker boats in Nagarjunasagar and Somasila as they are located away from towns,” he said.

Moreover, the officials expect the tourist inflow to the city will increase once the cable-stayed bridge is completed